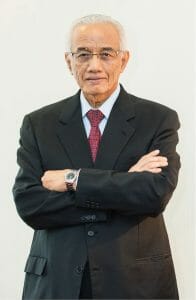 Tan Sri Dato’ Ir. Hj. Zaini bin Omar, a Malaysian, aged 72, is our Independent Non- Executive Chairman and was appointed to our Board on 18 September 2017. He has vast experience in the electricity sector, the aviation sector, the water supply sector and the works sector.

He graduated with a Bachelor of Engineering from James Cook University of North Queensland, Australia in November 1974 and holds a Bachelor of Laws from the University of London awarded in July 1985. In November 1986, he obtained his Professional Engineer status from the Board of Engineers, Kuala Lumpur and in September 1988, he was admitted and enrolled as an Advocate and Solicitor of the High Court in Malaya. In April 2003, he was conferred with a Doctor of Philosophy (Engineering) by University Tun Hussein Onn, Malaysia. He was, from February 2000 to July 2005, the President of the Board of Engineers Malaysia and is currently the Honorary Fellow of the Institution of Engineers Malaysia and a fellow of the CIDB.

In April 1975, he began his career as an Electrical Engineer at the Public Works Department, Malaysia and was responsible for the electrical engineering works of project involved by the department. In October 1990, he was seconded to the Department of Electrical Supply as a Director of Operations and was responsible for overseeing the overall operations of the department. In October 1995, he joined the Department of Civil Aviation as the Director General where he was involved in the construction of the Kuala Lumpur International Airport.

In January 2000, he returned to the Public Works Department, Malaysia as the Deputy Director General 1 and was responsible for assisting the Director General in managing the department. In October 2000, he was promoted to Director General and was responsible for leading his team in implementing all government projects and served as the technical advisor to the Government. In July 2005, he retired from his position in the Public Works Department and was appointed as the Chairman of the National Water Services Commission and also the head of The Special Unit for Overseas Projects in the Economic Planning Unit, Malaysia until 2009.

Presently, he is an Independent Non-Executive Chairman of Digistar Corporation Berhad, a company listed on the Main Market of Bursa Securities and he also sits on the board of several private companies as disclosed in Section 7.2.4 of this Prospectus. 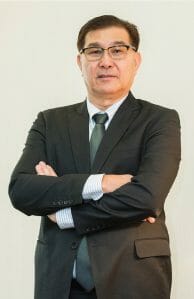 Cheah Ham Cheia, a Malaysian, aged 65, is our Managing Director. He was appointed to our Board on 28 February 2013 and is responsible for the overall guidance on our Group’s business direction and manages the strategic development of our Group. He graduated with a Bachelor of Science in Engineering from University of Aberdeen, United Kingdom in July 1985. He has spent his entire career in the construction industry with over 38 years of experience.

In November 1977, he began his career with Mitsui Construction Co Ltd as a supervisor for Pasir Panjang Wharf Project in Singapore and Prima Flour Mill Project in Sri Lanka. In February 1980, he joined Maltimor Sendirian Berhad as a Supervisor for Batu Niah Water Treatment Plant and reclamation works at Sejinkat Naval Base Project in Sarawak. In July 1982, he joined Mitsui Jurutama Joint Venture to act in the capacity of a Site Engineer for the Federal Highway Phase II infrastructure improvement works.

In October 1983, he furthered his studies in University of Aberdeen, United Kingdom. Upon graduation in July 1985, he returned to Mitsui Construction Co Ltd as a Site Engineer for the construction of the interchange and related facilities at the intersection of Jalan Kepong with Jalan Kuching and the upgrading work for Jalan Kuching. In July 1987, he was promoted to Chief Engineer and was responsible for the overall planning and supervision of the construction of Electrolux Factory Project in Shah Alam. In January 1989, he was appointed as Engineer and was responsible for liaising with the Government authorities and consultants for the construction of Kuala Lumpur Interchanges along Jalan Pahang, Bulatan Kampung Pandan, Jalan Cheras and Bulatan Edinburgh. In July 1992, he was appointed as the Quality Control Manager and was responsible for the quality control and procurement of construction materials for Kafco Fertiliser Plant Project in Bangladesh.

In July 1996, he was promoted to General Manager of Putra Perdana Construction Sdn Bhd, a wholly-owned subsidiary of Putrajaya Perdana Berhad, and was responsible for establishing work plans and staffing for projects, directing and coordinating activities of project personnel, and providing technical advice to resolve problems. In July 1997, he was promoted to Senior General Manager and was responsible for planning, directing and coordinating project activities to ensure projects are completed within the stipulated timelines and funding parameters. 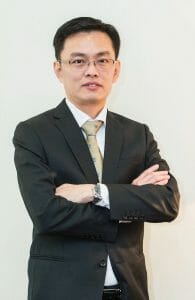 Alexander Lo Tzone Leong, a Malaysian, aged 49, is our Executive Director. He was appointed to our Board on 3 August 2016 and is responsible for assisting our Managing Director in the overall management and operation of our Group as well as overseeing the overall operations of our construction projects. He graduated with a Certificate in Technology (Building) from Kolej Tunku Abdul Rahman, Malaysia in May 1992. He has spent more than 25 years in the construction industry.

In January 2010, he was promoted to Senior General Manager at Putra Perdana Construction Sdn Bhd and was responsible for planning, directing and coordinating of designated projects to ensure goals and objectives of the projects are accomplished within prescribed time frame and budget parameters. He was involved in the construction of Felda Tower Platinum Park, The Intermark in Kuala Lumpur and Menara PJH in Putrajaya. In March 2012, he was promoted to Deputy Chief Operating Officer. He was responsible for assisting overall planning and development during the construction of The Z Residence, Breezeway Condominium Project and Ara Green Wellness & Healthcare City in Kuala Lumpur. In April 2013, he was promoted to Chief Operating Officer and was responsible for all daily operations of the company and routinely reports to the Chief Executive Officer. He left the Putra Perdana group in May 2013. 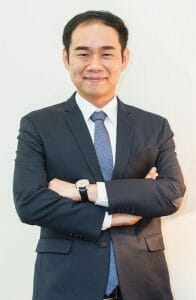 Cheah Jun Kai, a Malaysian, aged 34, is the Executive Director for our Group and the Senior Manager for Finance, Risk Management and Business Development division in Grand Dynamic Builders. He was appointed to our Board on 28 February 2013 and is responsible for managing and overseeing the Finance, Risk Management and Business Development division of our Group. He graduated with a Bachelor of Arts in Accounting from University of Hertfordshire, United Kingdom in July 2011.

In July 2011, he began his career as a Management Trainee at AmInvestment Bank Berhad. He was responsible for performing credit administration tasks including computing and commenting on company’s financials, analysing the repayment ability, and presenting his findings to supervisor. He took a career break from October 2011 to February 2012.

In March 2012, he joined WorleyParsons Business Service Sdn Bhd as an Accounts Payable Graduate Officer. He was responsible for performing analysis of accounts for account payable module, performing accounts payable reconciliation to General Ledger and process supplier invoices. In July 2012, he was promoted to Accounts Payable Officer after getting confirmed by WorleyParsons Business Service Sdn Bhd. In February 2013, he was promoted to General Ledger Accountant. He was responsible for the month-end financial reporting, the profit-loss fluctuation analysis and the balance sheet accounts reconciliation. In November 2013, he was promoted to Senior Business Analyst. He was responsible for the account payable stream of the company by developing, managing and monitoring the key performance indexes and developing key controls upon high risk function before leaving in July 2014.

In July 2014, he joined Grand Dynamic Builders as an Executive for Finance, Risk Management and Business Development division. Under the guidance of our Managing Director and Executive Director, namely Cheah Ham Cheia and Alexander Lo Tzone Leong as part of the management succession plan, he was involved in our Group’s budgeting, forecast and planning, establishing and monitoring key risk indicators and implementing corrective action plans to mitigate risks as well as screening potential business deals by analysing market strategies, deal requirements and financial evaluations. In addition, he was also responsible in managing our Group’s information technology and computer systems. In January 2016, he was promoted to Assistant Manager for Finance, Risk Management and Business Development division. He was responsible for managing our Group’s overall budgeting, forecasting and planning, designing and implementing overall risk management processes for our Group, and develop and coordinate systems, policies and procedures for our Group. 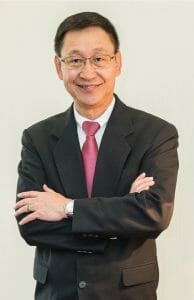 Datuk Chia Lui Meng, a Malaysian, aged 66, is our Independent Non-Executive Director and was appointed to our Board on 18 September 2017. He has 40 years of experience in the property development and construction industry and has worked in both the public and private sectors.

He graduated with a Bachelor of Quantity Surveying (Hons) from Universiti Teknologi Malaysia in December 1978. He also holds a Bachelor of Laws (Hons) Degree from the University of London awarded in August 1994 and completed the Certificate of Legal Practice awarded by the Legal Qualifying Board Malaysia in December 1995. He is a Fellow of the Royal Institution of Surveyors, Malaysia since August 2005, a Member of the Society of Construction Law (Kuala Lumpur and Selangor) since July 2006 and a Professional Member of the Royal Institution of Chartered Surveyors since November 2007. He was admitted to the Malaysian Bar in May 2017.

In March 2008, he joined Viet Hung Urban Development & Investment J.S.C Land Berhad as the Chief Operating Officer and was based in Hanoi, Vietnam. He was responsible for the development of a 1,200 acres township called ECOPARK. In April 2009, he joined Naza TTDI Sdn Bhd as the Director and Advisor to the Group Managing Director and was responsible for assisting and advising the Group Managing Director in the marketing and sales of all developments. In October 2011, he joined Malton Berhad as the Chief Executive Officer and was responsible for overall administration of the company. In June 2012, he returned to United Malayan Land Berhad as the Group Chief Executive Officer and was responsible for the overall administration of the company. In June 2016, he retired from his position in United Malayan Land Berhad but remained as a Non-Executive Director of certain subsidiaries under the United Malayan Land Berhad group. He is currently the Secretary of the Real Estate and Housing Developers’ Association Wilayah Persekutuan (Kuala Lumpur).

Currently, he is now practising as an Advocate & Solicitor in Soh Hayati & Co specialising in the area of construction law. 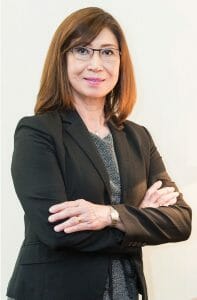 Kow Poh Gek, a Malaysian, aged 64, is our Independent Non-Executive Director and was appointed to our Board on 14 December 2017. She has 36 years of experience in accounting and finance.

Prior to her graduation in May 1982, she started her career, in April 1982, as a Financial Assistant at Aspatra Managements Sendirian Berhad and was involved in assisting the general accounting matters for the company, including preparation of management accounts and tax filling. In December 1984, she was promoted to Manager, Corporate Planning and was responsible for leading the feasibility studies for the company’s business planning. She left the company in June 1986.

In July 1986, she joined United Malayan Banking Corporation Berhad (now known as RHB Bank Berhad after the banking merger in 1999) as a Trainee Officer, Class I at the Corporate Investments Department and was involved in conducting financial feasibility studies for the bank’s business planning. In January 1990, she was promoted to Assistant Manager and was leading the budget reporting activities of the Finance & Accounts Division.

In June 1995, she joined TA Securities Sdn Bhd as a remisier. As a remisier, she was responsible for executing equity trades on behalf of clients. She left the company in April 2001.